with more than anyone else 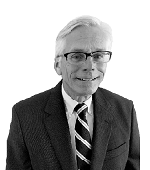 Bill has worked on ERISA matters for over thirty years from both the litigation and rulemaking perspectives.  He handled cases involving complex transactions in a wide variety of areas, including real estate and employer securities.  On the regulatory and guidance side, he advised the Employee Benefits Security Administration (EBSA) on all regulations, prohibited transaction class exemptions and other guidance over more than twenty years.

From 1982 until 1991, Bill was a trial attorney and then a supervisory trial attorney with the US Department of Labor’s Office of the Solicitor, Plan Benefits Security Division. He worked on many cases enforcing the fiduciary responsibility requirements of ERISA. These involved a wide variety of transactions and investments, such as real estate (including employer real property), employer securities, and LBOs/takeovers Defendants in such cases included large corporations, banks, and unions. Bill briefed and argued appeals.

As Counsel for Regulation in the Plan Benefits Security Division, a position he held from 1991 until his retirement in 2016, Bill lead a team of attorneys responsible for advising EBSA on all the regulations, class exemptions, advisory opinions and other guidance issued by the agency. During his tenure in this position, EBSA issued many regulations and constant stream of advisory opinions, prohibited transaction class exemptions, field assistance bulletins the ERISA practitioners rely upon in helping their clients comply with their responsibilities regarding employee benefit plans. This long and broad-based experience has given Bill an exceptional familiarity with ERISA’s complex statutory provisions and regulations, as well as all EBSA’s other forms of interpretive guidance.

Major regulatory projects that Bill worked on include the recent regulation defining fiduciary investment advice, regulations on abandoned plans, qualified default investments, claims procedures, the treatment of participant contributions to pension plans as “plan assets.” He also participated in the issuance of class exemptions. He was actively involved in advising EBSA regarding the large quantity of guidance issued under the Affordable Care Act.

© 2019 Fiduciary Resolutions, Inc.  All other trademarks and copyrights are the property of their respective holders. This website provides information related to the subjects covered. Before making any financial or legal decisions, a professional should be consulted.